Here, you will see lessons on Greetings, Colors, and Numbers (1-10)

I am currently teaching Spanish and French in our homeschool co-op (ages 1-5) and additionally Mandarin Chinese to my children.
The only thing I stress is that I make sure they notice and know which language we are working on at the time. They switch gears rather easily and do very well. Even those who do both French and Spanish with me (on different days) haven’t had a problem. I haven’t thought of a strategy on how to teach languages to youngsters because I haven’t really encountered the need to have one.
My 2 year old was mixing letters. She knew all the letters in the alphabet in both English and Spanish, but she’d say some in English and some in Spanish. She is now getting better at differentiating them a bit more.  I hope this helps.
French (First Class)
Well, today went great. It was shorter than we thought, but the kids did awesome! I love small groups! 🙂
We learned Bonjour (hello) and Au Revoir (goodbye)
Our friend, Ratounet, taught us a song with a few French words.
Here is the link: CLICK HERE
Please show it to your kids a few times during the week and feel free to print the lyrics.
In the “Au Revoir” part, there is another phrase in there, but I repeat the same as the “Bonjour” one. Keeping it simple. 🙂
[mailerlite_form form_id=7]
_____________________________________
Bonjour, bonjour, bonjour Madame (Mrs.)
Bonjour, bonjour, bonjour Monsieur (Mr.)
Bonjour, bonjour, comment allez-vous? (how are you?)(comet alle voo)
Bon bon bon bon bon bon bon bon-jour!
Au Revoir, au revoir, au revoir Madame
Au Revoir, au revoir, au revoir Monsieur
Au Revoir, au revoir, comment allez-vous? (it says something else, but don’t worry about it)
Au au au au au au au au au Au Revoir!
_______________________________________
French: Greetings
In French, we reviewed our greetings and now, they know how to say their name! Bonjour, je m’appelle …. We are taking it slow, but keeping it fun, just to make sure everyone learns concepts well.
Vocabulary they know so far: bonjour (hello), au revoir (goodbye), salut (hi and bye), madame (Mrs.), monsieur (Mr.), ça va? (how are you? – informal), oui (yes), non (no).
Today, they learned je m’appelle … (my name is…). They made a drawing of their family members with their names. I wrote “Bonjour, je m’appelle __________.”
The object of the activity is to go through each member of their family and read the sentence filling in the blank with their names.

French: Greetings
In French, we reviewed greeting and learned some more vocabulary. They remembered most of the vocabulary learned previously and they loved singing the Ratounet (French) song. They were all engaged and participating really well. We made cards with some greeting words and phrases and played a game to match them up. They even took some of them home.
Bonjour-Hello      Au Revoir-Goodbye      Ça va?-Is everything alright?
Comment allez-vous?-How are you?       Bien-Good/Well

French: Les Couleurs
We did the same thing as in Spanish class and used the same egg crates for the activity.
I introduced the colors. We repeated the colors and compared them to other languages like English and Spanish.
We also watched a video that pronounces the colors in French really well. There was a part in the short video where a girl went off in French talking about her family. The kids were super attentive and quiet, listening to every word. After the girl was done, you should’ve seen the kids’ faces when I told them that we’ll keep practicing French and that someday they’ll understand everything she’s saying. They were flabbergasted and loved the idea!
Then we added the French mini cards in the egg crates. They had fun sorting them all out. They did awesome!

French: Les Couleurs (Co-op class)
In French, we watched a French video (about 8 min long) that introduced vocabulary in the following categories: the universe, means of transportation, insects, musical instruments, in the city, my body. There is also a short monologue of a girl describing her family members in French. The kids love it all, but it isn’t just fun; it is training their ear to listen to spoken French with its unique pronunciation.
Then we read the color book, talked about what colors we are wearing, found objects in the room that were those colors, etc.
Finally, we went over the color flashcards. Mack was disappointed that I didn’t have a flashcard with pink (awww), but the book did have pink. The book didn’t have brown or purple, but the flashcards did. They all did awesome! I’m so glad we’re doing this! 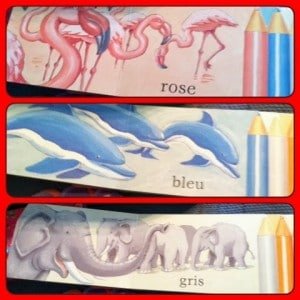 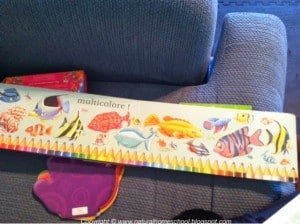 French: Les Couleurs (The Colors)
In French, we briefly went over vocabulary on: parts of the body, colors, familiar objects, food, family members and fruit. It not only exposes them to new words, but they also train their ears and tongues on new sounds and pronunciations.
Then we reviewed the colors and did the front of the worksheet you see. I kept them because we will complete it next week. We have French only once a week for 30 minutes and yet they retain so much! I am amazed! Gotta love these little sponges! 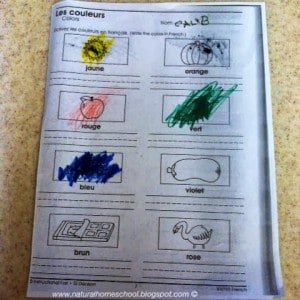 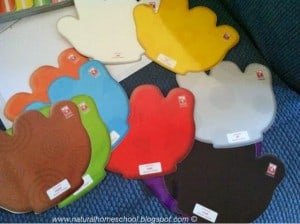 French: Les Nombres
In French, we learned the numbers 0-10. First, we used the sheet with yellow typing to review the words and pronunciation. Then, I showed them a youtube video of a song in French. I will post the link on here so the kids can watch and sing at home. Then, we cut squares with pictures and we matched them to the numbers. Lastly, we colored.
They had fun. Try to play the video for them during the week. Again, I will post the link in a little bit. 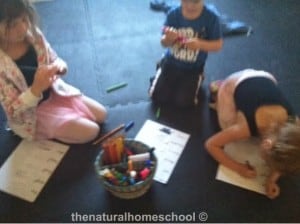 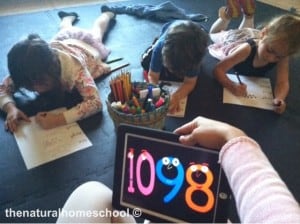 French: Les Couleurs (The Colors)
French: we started off saying “Bonne Année!” (Happy New Year).
Then we talked about Sydney’s birthday and sang “Joyeux Anniversaire à Toi” (Happy Birthday to You). We reviewed the colors in French with our handy dandy flashcards and then we read a very special book. It has special effects and the kids were fascinated with it. We had a lot of fun reading it and talking about the colors. There was a lit of French text in it, but I would read it and translate each sentence to English.
We finished up making a quick “Bonne Année” card. 🙂 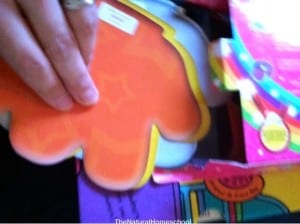 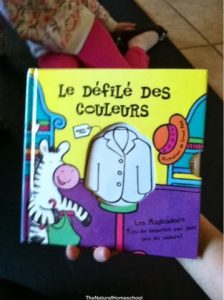 French: Les Nombres (The Numbers)
We sang Joyeux Anniversaire à toi (Happy Birthday) to A and then studied the numbers 1-10 in French.