Have you heard of this DVD? Have you heard what it is about? This is a full review of the film IndoctriNation. Read on to see what the filmmaker has to say. You can also read my personal opinion at the end of this post. 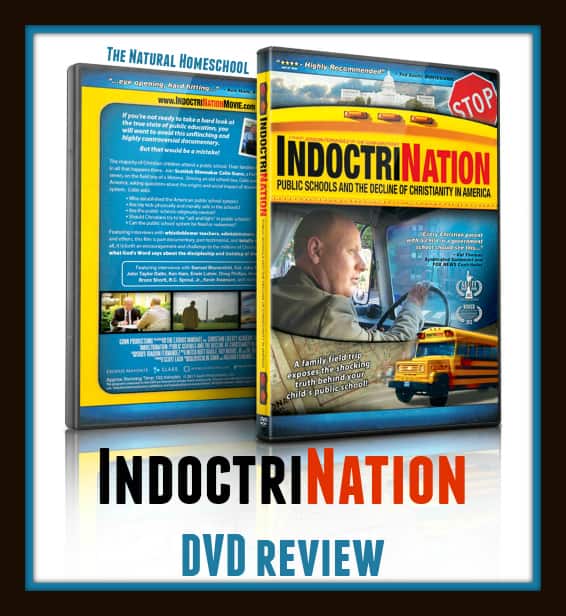 From taking “under God” out of the Pledge of Allegiance to prohibiting prayer in football games, public schools have, according to this film, indoctrinated millions of children into a God-less and humanistic culture because they spend the majority of their waking hours in these institutions.

Colin Gunn [filmmaker of IndoctriNation], a Scotland-born homeschool father of seven, travels across the USA on a quest to understand the origins and social impact of America’s modern public education system.

Watch a Video Excerpt Here (I’m sorry about the quality of sound.)

Provocation of the System

There are 480,000 school buses that take about 26 million children (many of them from Christian homes) to public schools every day. This is an astounding number of parents that trust their government to teach their children and help them become “law-abiding” citizens. But whose doctrine is being taught there? Who are the people put in charge in these institutions? Do we know?

The system isn’t happy when criticisms like this film (IndoctriNation) come out because many issues come to light. There are research studies and statistics that recount and confirm time and time again staggering numbers in our nation’s public schools. We read the number of high school dropouts because of drugs, alcohol, incarceration, teen pregnancy, gang memberships and lack of adult follow-through in schools…all we do is shake our heads.

Films like IndoctriNation can provoke a plethora of feelings in those in charge of the public school institutions in question, their staff and even the politicians that oversee the Department of Education’s “ins and outs.” Some of those feelings can be anger (How dare they criticize our schools?!), denial (What are they talking about?! Our schools are great!), indignation (After all the hard work we do…), and many others.

Exposing what goes on in public schools when it comes to reading scores, sexuality (how early students become sexually active -with peers or school staff- and the type of sex education offered in the schools), abortion (and how this is handled behind parents’ back by school staff), drugs, alcohol and violence (did anyone say “school shootings?”) can definitely be a sobering experience. One thing that could be a step in the right direction would be to have “an awakening” or a “coming to our senses” on the part of those who are responsible of running the public school system in this country.

“Is there any truth to the ‘salt and light’ argument that encourages Christians to send their kids to public school?” About 90% of Christian parents send their children to public schools. According to the DVD, different denominations fight with each other and even amongst themselves about many doctrinal issues and beliefs. But no one disputes the condition of public schools or tries to do something to better the system.

One person interviewed in the film said, “We don’t lose them [our children], we give them away.”

This film explained the origins of the compulsory public school system and who were the founders of it. Founder after founder, was either a humanist, an evolutionist, an atheist or a communist. The list is too long and there are far too many details and quotes to include here. If you are interested, watch this film. I will quote one, though, Robert Owen, otherwise known as “a capitalist who became the first Socialist,” said, “For, believe me, my friends, -you are yet very deficient with regard to the best modes of training your children, or of arranging your domestic concerns…”

Parents, this DVD (IndoctriNation) will stir all kinds of emotions and thoughts. Some of you may be mad, upset, in denial or indignant that someone would put out a film like this one. Others may feel like this is a very black-and-white rendition of the reality in public schools and knowing this kind of information, will spark in them an interest to look more into it; either to find out more about educating at home or to help come up with strategies to make a difference in such a broken system.

My husband and I watched this film together. My husband, along with his six siblings, were educated at home all the way up to high school, so I was curious as to what his thoughts were on the film. I was’t educated at home, but I do keep my children home and educate them here.

My first thoughts after watching this film were, “Are we really deficient, as parents, to raise and educate our children well? Can a complete stranger be a better and trustworthy role model, mentor and better example than us to our own children?” No, I don’t think so. Are we sometimes unprepared or unorganized? Maybe. Deficient? A resounding “no” rings in my mind.

If you are interested in helping with legislation to change the public school system, to become more involved in the public schools your children attend, to solidify your decision on why you are homeschooling or to start considering educating your children at home, watch IndoctriNation. I will prepare you: this is a very honest, cut-and-dry, factual evaluation of public schools today. It may seem a bit insulting or crude to some, but to others, it can be the exact awakening that they needed.

If you are remotely curious as to how your child’s education is, watch this film. The choice is yours and yours alone. Thank you for reading.