Home / Homeschool / The Chart that Saved our Emotions (Big Time)

K (4yo) has been dealing with a little something called “asynchronous development.” What that means is that he isn’t developing at the same rate in all areas of his life.

He has been tested and came out as highly gifted. He is at a middle of first grade level in Math, Science and Social Studies, at the end of second grade in English, at the beginning of third grade in Spelling and close to fourth grade in Reading. Emotionally, as a gifted child, he feels a bit out of sync and feels everything very strongly. He is definitely developing chronologically socially. His intellect is far advanced, but his emotions and social areas are still that of a 4-year old.
After doing a lot of research, a lot of talking with my husband and a whole lot of prayer, we feel so much better about how to go about helping him in this situation. The last thing we want is for a distressed, disgruntled child because he takes things so seriously and so to heart. I found a great article (CLICK HERE TO READ IT) that gave me this idea.
1. We got our large post-it notebook.
2. Wrote “Reaction Scale”
3. Numbered it on the left from ten down to zero
4. We started with 10, being the worst reaction you can get (yelling, crying, kicking, stomping, etc) and we thought that our house burning down would be a good reason to display all of those outrageous emotions. We wrote in a circle “OK” because in that instance, it would be ok to react like that.
5. We went to number 1, where we would barely react and we wrote “NOT OK” in a circle next to it, signifying that it is not ok to have those overreactions.
6. We thought of a number 5 reaction and then filled in the rest of the numbers. Next to all of them, except for the 10, we wrote “NOT OK” in the circle.
7. I told him that from then on, whenever he overreacted, I would make a circle with my hands (like the letter O) and tell him “NOT OK” so he can remember the chart and stop overreacting.
8. We role played a couple of times and I let him embellish it.
I am telling you, IT WORKED FOR US!!!! Wow! It has been a couple of week and he is really self-moderating well. I have to do the “NOT OK” thing maybe once a day, if that.
It is amazing how much it has helped! 🙂
We hung up the chart in our living area, where we can see it and refer to it often.
I highly recommend it for those children who have a tendency to overreact or have extremely intense feelings about things. 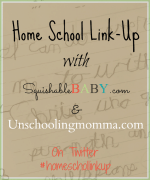