This review is seriously an amazing privilege for me. Actually, this isn’t only a review, but it is a product that speaks directly to our hearts and it revives everything that we, as a family, stand for and believe in.

So without further ado, here is my review of Under Drake’s Flag. Don’t forget to visit our resources hub for printable flags activities and lessons ! It is full of wonderful hands-on ideas for you to use at home. 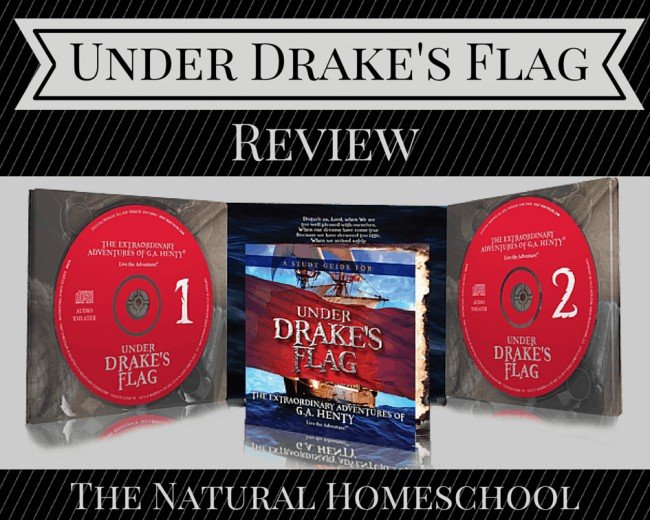 With Lee in Virginia: The Extraordinary Adventures of G.A. Henty

Under Drake’s Flag: The Extraordinary Adventures of G.A. Henty

In Freedom’s Cause the Extraordinary Adventures of G.A. Henty

The Dragon and the Raven – The Extraordinary Adventures of G.A Henty

Beric the Briton – The Extraordinary Adventures of G.A. Henty

This CD set was created and published by Heirloom Audio Productions. They have done a fantastic job at creating a masterpiece that appeals to the young and old alike. I must clarify: Under Drake’s Flag is NOT an audio book; it is an incredible 2-hour long adventure that will keep you captivated and intrigued the entire time. It is Audio Theater. The actors, their voices, the sound effects, the background sounds, everything was masterfully put together to bring you a phenomenal experience.

Let me give you a little bit of history about the author and his work. G.A. Henty was an English novelist and war correspondent in the mid-1800s. He completed 122 works (historical fiction) in his lifetime. Some of his most important books are Under Drake’s Flag, The Dragon & The Raven and In Freedom’s Cause. His work was immeasurably beyond high quality and his popularity has become more and more notorious overtime.

Here is a video clip for you to see and listen to part of this amazing audio theater set.

When we received the set and the first thing I did was read Sir Drake’s Prayer. It is amazing. I then knew that this would be a very special experience for us. 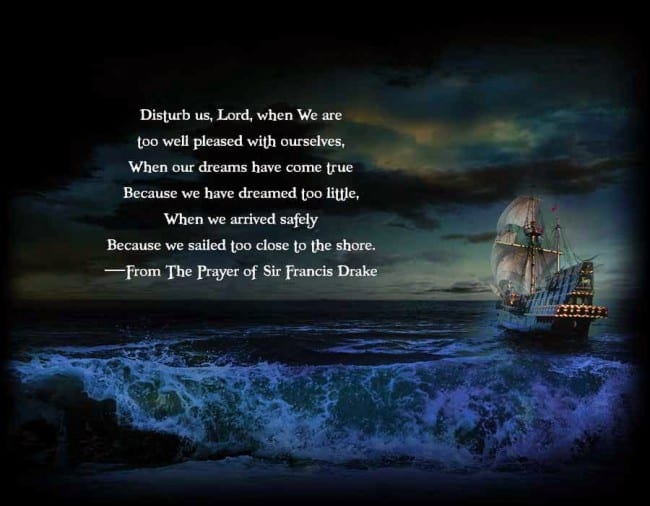 I must add that, even though this set says that it is for ages 6 to adult, my children still thoroughly enjoyed it. They are younger (5, boy and 3, girl) and both highly gifted. I played it in our car on our way to town (a 40-minute drive from where we live).

They are usually talkative, loud, distracted, etc, but when I was playing Under Drake’s Flag, they were silent the entire time (except for one time when my oldest asked if we were going to church and the occasional gasps and sighs that went right along with the story).

I had never seen them be so focused and so entertained by something with no visual stimulation. We listened to the 40 minutes there and 40 minutes back and then finished up the last 40 minutes at home. When we got to church, the CD was right in the middle of some intense action.

My oldest asked me to leave it on so he could hear the rest. I assured him that I would let him listen to the rest of it when we came back to the car. When the story was over (when we were home), they were sad and asked if I could play it again. I am telling you, the drama that they create in audio is superb!

What did I, as a homeschooling mom, like about Under Drake’s Flag?
~ It is great-quality work. It is two hours long, but it doesn’t feel like it at all because it is so engaging.
~ It is uncompromisingly Christian through and through. “To be a true hero, you must be a true Christian.”
~ It shows that true heart of a mother (Ned’s) in the story and the battles that we fight within because of our love for our children, yet we yield to God’s calling on their lives, no matter how hard that is.
~ Having a son, I can see how he was picking up and commenting on the characters’ bravery and courage to stand for what is right.
~ This is the kind of work that helps raise godly children.
~ Having a daughter, I greatly appreciate how she will be able to distinguish between a godly man and one that isn’t, in the story and in real life. Ned, the main character said it very well, “If we are not men of honor, we are not men at all.”
~ It includes a study guide and a link to homeschooling materials.

What did my son (5-year old) like about Under Drake’s Flag?
~ He loved listening to it, even though it didn’t have “pictures.”
~ He was completely enthralled with the shark attack and how brave Ned was.
~ He enjoyed the adventures the characters had on board the ship.
~ He would point out every time the word “Bible” was mentioned.
~ He said he wanted to be a superhero like the main characters.

Click here to listen to 30 seconds of Under Drake’s Flag.

The CD set of Under Drake’s Flag includes the two CDs and an unabridged study guide.
In it, you will find a
– How-to for the Study Guide
– Link to the complete version of the Study Guide
– “Listening Well” section with questions about each track
– “Think Further” section with questions that aren’t directly included in the audio, but they challenge children to draw inferences and conclusions about the story
– “Defining Words” section that will make the audio easier to understand
– Bible Studies that are directly connected to the audio and that will feature godly character and Biblical beliefs throughout the listening experience.

You can order Under Drake’s Flag HERE.
They have four awesome offers.

And that is not all!
Here is your chance to see the newest work by Heirloom Audio Productions: In Freedom’s Cause. It is also fabulous! Watch the trailer for it below. It will be released in November of this year! 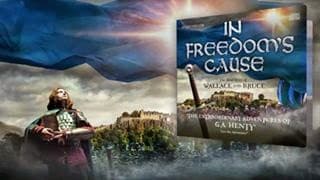